This is a smart, honest and deep hardcore game. A true intellectual challenge. I just got tired of cartoon casual card battlers, pay-to-win games, random focused game mechanics, timers, energy bars, speed-ups and other free-to-play crap. Together with my friend, various CG artists and game enthusiasts from all over the world we’ve made a game free of this annoying stuff. Play how you want and as much as you want.

Rips of MTG and Hearthstone made by studios with huge marketing budgets have filled the market. Piece of cake: popular franchise + successful mechanics + $ = $$$. We’ve made an original title. We realize that it's a huge risk. I’m sure the question: “Damn, what’s just happened?” - will be a pretty popular thought. Skillful in another game? Forget your experience. It's not a rip. Mechanics are original but very logical. Don’t hurry. Read, examine, experiment. Enjoy discovering the layers of the game. We have almost forgotten this feeling.

There are no paid advantages in PvP. Don’t wait for compromises or casual stuff. PvP is extremely intense. One mistake may cost you the victory. You can win or lose in a minute. Everything depends on your strategy. It’s a true fight of intellects. After the first 20 battles you will respect that guy on the top with 3000+ wins. I don’t know how he’s made it. Especially with the cards he had.

The AI is unique

There is a lot of PvE content in the game. Feeling so powerful after victory in Elven Fist mission? Try challenges, limited time events, side quests and daily quests. You always have a possibility to grow. The AI is brilliant. He does not know your cards, so no cheating. He used to be so good that we had to make him dumber because he ruined the server. Still don’t wait for favors from him. He’s not as creative as you but he knows how all the cards work. Wanna a core fight? Only 20% can finish the story.

No strongest race, strongest card or warlord. The balance is perfect. There are no imba decks. You can suddenly lose from a weak bot. Though I hate random there is a luck factor in the game. Why? Because it’s a great balancing tool. It gives a chance to win like in real life. But fortune favors the prepared. Choose from the 300+ card pool, 18 warlords (with 3 skills each) and get ready for any surprise.

Race tactics are different. Warlords are different. Some of the cards are pretty complicated. Use them as a scalpel not as a hammer. Gonna play as an assassin? Don’t pick up the dwarves, they are heavy, slow and prefer fortification. Your choice is the elves. Like meaty heavy rush? Don’t pick up the undead. They are controllers, have powerful spells. But ghosts and skeletons do not have a lot of health and it’s logical. Your choice is the orcs. Or mix them with other cards. A deadly stab in the opponent’s back by an elven assassin is a good start for the orcish rush.


Now it’s role playing through strategy. You are your army. To me, role playing is not about spreading experience points or choosing who to sleep with virtually. It is your own unique battle style. The game gives you enough content for that. You can play as a mage or a warrior, an assassin or a tank, a necromancer or a paladin and more.

To improve social interaction we’re already working on a huge update with clans, a global map with POI and a non-linear campaign. We need your support, guys, to make the game live on Steam.

Who asked for a hardcore and honest old-school collectible card game?
Here it is. 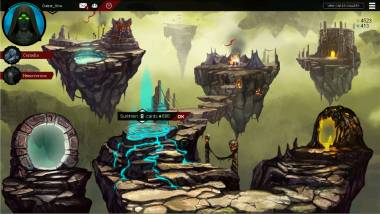