A Retro 2D (2-Dimensional) Overhead Online Cartoon Role-Playing Game for all ages. This requires a online connection. Currently in Open Beta, this features two main classes Ranged and Close Combat. For both classes you will have access to several Skills which each can be upgraded by using them. This shares common classic Role-Playing Game elements, such as Levelling, Exploration, Socializing, Battling, Progressing your Character, Obtainable Items, Weapons and Armor, which can be created and upgraded, Shops, Auctions and a Look Merchant to customize the look of your avatar. We also feature a bonus XP system that will give you Experience just for moving/attacking. It has Player versus Player combat which is unlocked at level 20. The Engine has dynamic map generation which will enable us to create allot of Maps with less effort. It is simple to play, yet has some powerful mechanics that even hardcore players will like. 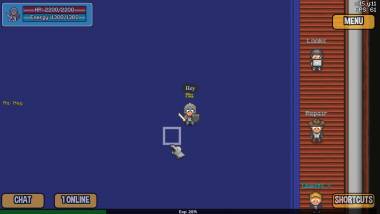